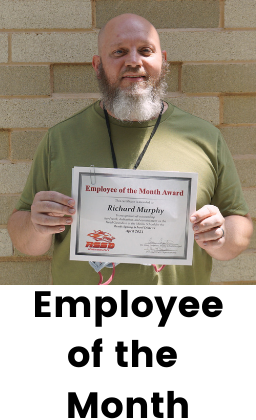 The Reeds Spring School District recognized Richard Murphy as the Employee of the Month for April. Murphy is the head custodian at Reeds Spring Middle School.

“Since joining our team, many staff members have made it a point to praise Richard for how hard he works to provide for everyone,” said RSMS Principal Casey Carpenter. “He is very much a servant leader.”

Murphy was a custodian at the high school before transferring to the middle school. His responsibilities include general cleaning, painting, and repairing items in the building, along with project development and oversight.

“Richard has built a solid reputation with the staff as someone who does what he says he will do,” said Director of Operations Steve Verheyen. “Richard is insightful, kind, helpful, with good attention to detail.”